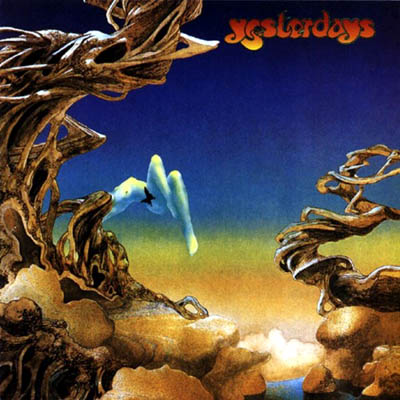 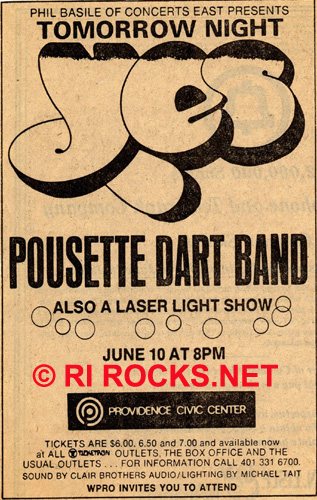 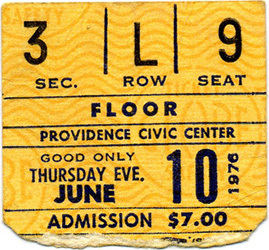 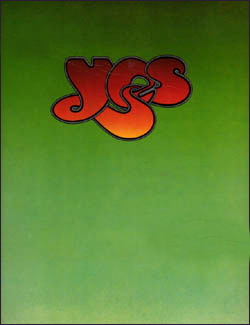 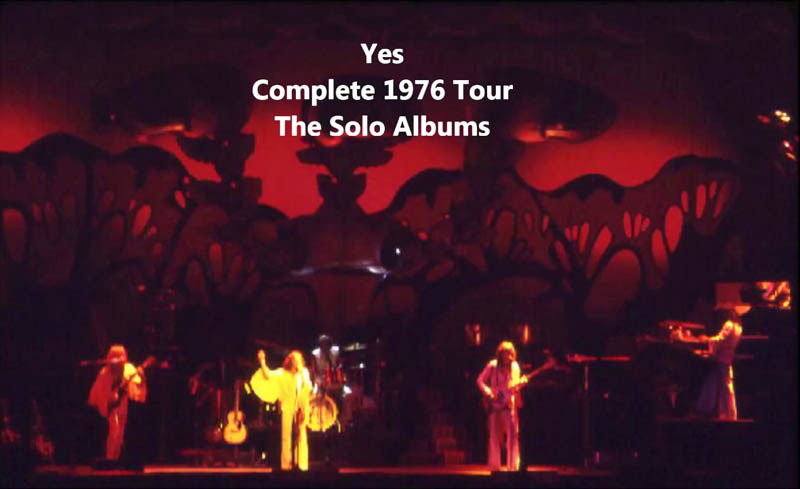 This was the first time I saw Yes. I was a major Yes fan, even had YESONG on my license plate. My friend Rick G. and I drove down to Providence from New Hampshire in my beater car - it's a minor miracle that we made it. We got there way early (to allow for breakdowns) and happened to walk past Jon Anderson outside the civic center. He was carrying a guitar case and looked every bit the part of 'mystic'. We were too intimidated to even say hello. I remember him smelling cool though.

The show was absolutely amazing, with the hydra-headed stage set and, of course, amazing musicianship. I left an even bigger fan of Steve Howe than I already was. Patrick Moraz was good as well, although I felt a little late to the game and would never see Rick W. play with them (of course I was very wrong). Probably the most vivid memory I have is of the long, intense "battle" section of Gates of Delirium ebbing and moving into the "Soon" section. It really felt like this incredible calm after the storm and very, very beautiful. (And no, I wasn't stoned). I've seen Yes many time since but this one was very special.

The summer '76 Yes show was by far the most spectacular I've ever seen them. Back then, when you were there in line when the tickets went on sale, you got great seats. Just one more thing that sucks about life these days - all the radio stations sucking up all the best seats right off the bat.

Anyhow, I remember I had cut school in order to get the tickets, and also that I skipped being in the talent show because it was on the same night as this concert. But man - was it worth it. This was the only time that I saw them use a MULTI-COLORED laser show. Years later, when we went to see them during the 90125 tour, I remember that initially they put on all of the colored lasers and I mentioned to my friends that I was surprised they were using them all again. Unfortunately, they cut all of the colors back until they had only green. This has something to do with federal law here in the US - the amount and type of radiation which is emited by the different types of lasers. Pain in the ass. The only reason that I even know this is that I had checked into it at one time when we were considering using lasers in one of my past bands. To this day, I remember how awesome that colored laser show was.

The rest of the lighting - as is usual for them - was equally enchanting. That hydra / vertebra thing ... hmmm ... obviously a Roger Dean design. Really kewl. The thing that impresses me the most about their lighting - thinking back now - is that very few bands were using the type of lighting effects which only a handful like Yes - and perhaps Pink Floyd and Genesis - were using. Of course nowadays everyone has a great light show - because everything is all computerized, which effectively synchronizes the lighting with the music. But Yes were definite forerunners. They were doing this theatrical coordination of lights, of color with their music - long before others were.

The music was also in top form. "The Gates of Delirium" was incredibly intense - and tight - at this show. I remember Jon Anderson actually interacting with us during the concert. At one instance, he nudged Chris Squire and pointed to me - I guess because I was singing the words to "Delirium" right along with him. I have seen these guys many times over the years - and, no - I don't think I am finding all of the ticket stubs - well, not yet anyway ... there's no question that this was perhaps the best concert. Moraz's keyboard solos were also mindblowing (and believe me, I am a Rick Wakeman and Keith Emerson fanatic).

After the show, instead of leaving the normal way which everyone goes, we went around the building in the opposite direction. We were doing this to try to avoid the crowd and to be able to drive out sooner. There was a chain link fence there with a wide gate, but the gate was open. When we went back around that side of the building, we saw the huge doors and realized that this was the loading dock area. There was a smaller (regular) door at one side and we noticed a small gathering of about 10 or 12 people there. We asked them what they were doing and they said they were waiting to meet the band. We didn't believe them at first, but decided to wait there with them.

At this time I was 17 years old and an aspiring vocalist. Jon Anderson was like God to me. Well, I met him. He actually stood there and talked with us for a while. I shook his and Steve Howe's hands (well, Steve's arm actually - because he was carrying one of his guitars and that's the side of him which I was on). Chris Squire was the only one we didn't meet because one of the large doors opened and a limo came out. He was more or less "immediately whisked away," which I guess made it seem all the more strange to us that we were actually standing there talking with the rest of the guys. I suppose that Chris was the closest thing to being a "sex symbol" that Yes ever had - at least until Trevor Rabin, years later.

ALL of the guys are really kewl, but meeting

I saw Yes in '76 at Providence, RI, but that was my first rock concert ever, I was a teenager, I'd heard only portions of _YesSongs_ and, occasionally, Roundabout and other popular Yes tunes at that point, and had never used drugs so was dealing with the stench of dope (not as bad as cigarettes) as well as the use of lasers and other stuff for the first time, and I can't remember much at all about the concert except a few vague things (like, the opening using Stravinsky's "Firebird Suite", perhaps preceded with "Creation du Monde" by Vangelis, and I remember the weird "cha-cha-cha, cha-cha" that I later discovered was from a song called "Sound Chaser"). (Hmm, the above rambling sentence might suggest I used drugs for the first time there -- nope, I've always been "clean", for what it's worth. I ramble without any artificial stimuli whatsoever. :)