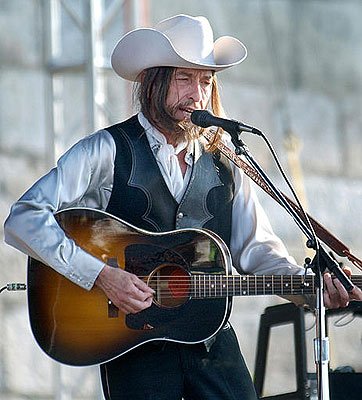 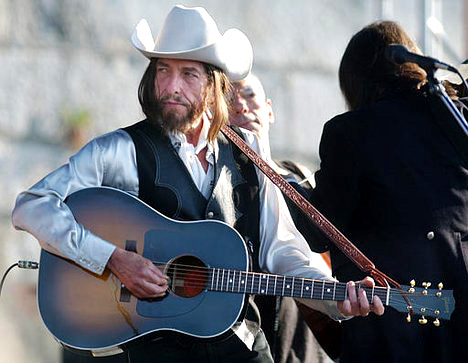 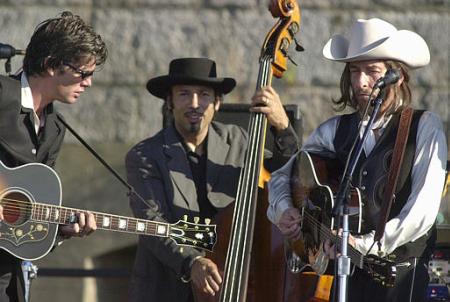 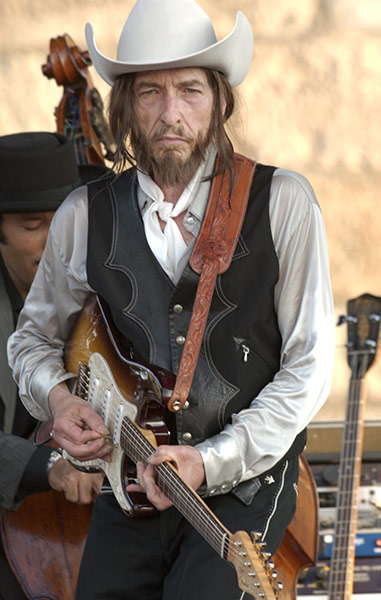 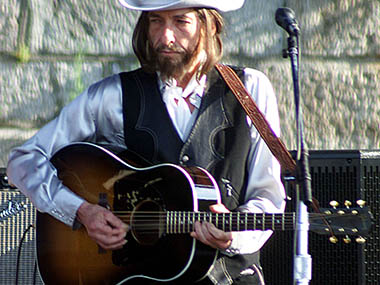 With his highly anticipated return to the Newport Folk Festival, Bob Dylan presented his audience not with a musical masterpiece nor any acknowledgment that this was a special gig, but rather the silly sight of himself wearing a wig that could have been styled by ex-congressman Jim Traficant.

Was this an indication that Mr. Dylan has a new cause to champion, having found something redeeming about Traficant unseen by the public and the press? Or was it just a goof to see how much palaver the wig (and fake beard) will generate in the media and elsewhere, his Newport ‘65 performance having established the gold standard for much ado about nothing much?

The setlist itself was a highlight, including “Subterranean Homesick Blues,” “Desolation Row,” “Positively 4th Street,” and “The Wicked Messenger;” plus two of the five songs he played here in 1965, “Like A Rolling Stone” and “Mr. Tambourine Man.” Anyone looking for special significance could sift through those lyrics, playful, querulous, and redolent as they are, cut and paste a bit, and posit “Dylan’s nod to Newport.”

The Newport ‘65 story percolated along through the decades without Dylan’s input, got a big boost after the recent death of Alan Lomax, and culminated Saturday on the op-ed page of the New York Times with a piece by festival founder George Wein. Our 2 cents worth: If Mr. Lomax and Pete Seeger had been more polite and composed that day, we probably would have been spared the hysterical story that wouldn’t die.

So unless there’s some significance to the applied hair, for Dylan it was just another gig on his “never-ending tour,” rather than his triumphal return to the Newport Folk Festival.

Indeed, his seemed to be an extra-festival set, as before he came onstage the Apple and Eve Newport Folk Festival backdrop was removed and the press area near the stage was evacuated.

Today’s was a typically generous 2 hour show of 19 songs, the second gig after a 12 week touring hiatus, which left an overall impression of being under-rehearsed. It lacked the seamless brilliance of last November’s tour finale in Boston, which was a masterpiece. The set list itself was a highlight, including “Subterranean Homesick Blues,” “Desolation Row,” “Positively 4th Street,” and “The Wicked Messenger;” plus two of the five songs he played here in 1965, “Like A Rolling Stone” and “Mr. Tambourine Man.” Anyone looking for special significance could sift through those lyrics, playful, querulous, and redolent as they are, cut and paste a bit, and posit “Dylan’s nod to Newport.”

That his set lists are built around songs written decades ago is testament to the fact that what Dylan created then is as fresh and welcome today as a sea breeze. But over the past several years, he has displayed a genius for performance, adding to his own incomparable song catalogue the works of other artists, blending the old and the new, his songs and others,’ cool costumes, crazy choreography, grimaces and grins, to present concerts that amount to fresh pieces of art.

Today, however, there were only artful segments, such as the electric, rollicking “Summer Days,” which followed the acoustic “Mr. Tambourine Man.” On the latter, Dylan’s delivery seemed narrational, which may have seemed apt to him as his audience at that moment actually was “…Silhouetted by the sea” and if not exactly “…circled by the circus sands,” then surely circled by the carnival tents of falafel and t-shirt vendors.

After a swig of water and strapping on his Stratocaster, Dylan then cut loose on a searing rendition of “Summer Days,” nodding his head and looking quizzically at his flanking guitar mates, Charlie Sexton and Larry Campbell. This is an infectiously swinging tune, with a wild pastiche of lyrics, including an excerpt from The Great Gatsby, “She says, “You can’t repeat the past.” I say, “You can’t? What do you mean, you can’t? Of course you can.”"

Bob Dylan has never seemed interested in repeating the past; and it doesn’t seem likely there’ll be a repeat of all the Newport ‘65 malarkey in the wake of Dylan Newport ‘02. One thing for certain about it: there were no boos, but there were plenty of fruit juice.