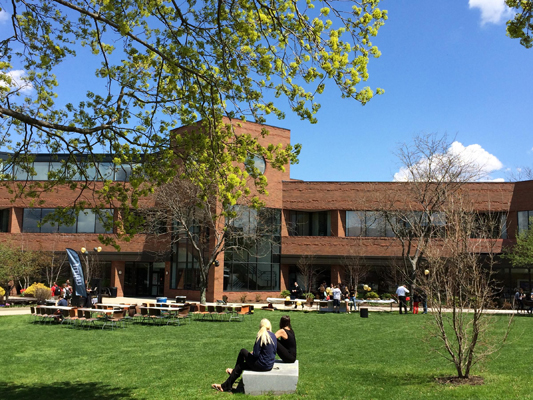 Bryant University is a private university, located in Smithfield, Rhode Island, U.S., that grants the degrees of bachelor of arts, bachelor of science, and master's degrees in business, taxation, accounting, communication, global environmental studies, and physician assistant studies. Until August 2004, it was known as Bryant College. Bryant comprises the College of Arts and Sciences and the College of Business, and is accredited by the New England Association of Schools and Colleges and the AACSB International.

Butler Exchange & downtown Providence - Bryant University was founded in 1863 as a branch of a national school which originally taught bookkeeping and methods of business communication and was named after founders, John Collins Bryant and Henry Beadman Bryant. This chain of school is currently called Bryant & Stratton College. In 1916, the Rhode Island branch was sold and merged with the Rhode Island Commercial School. Classes for Bryant and Stratton College were originally held in the now demolished Butler Exchange building located in downtown Providence, at 111 Westminster Street on Kennedy Plaza. Bryant became non-profit in 1949 and offered its first master's program in 1969.

College Hill - From August 1, 1935 to 1971, Bryant College of Business Administration campus was located on College Hill near Brown University. Housed first at "South Hall" at the corner of Hope Street and Young Orchard Avenue, formally Hope Hospital, the college expanded into neighboring buildings. The "South Hall" building was originally the 19th century home of a manufacturing family Sprague. When the school relocated to Smithfield, it sold the Providence campus to Brown University. The property, 26 buildings on 10 acres of land, became known as Brown's East Campus. The former South Hall became home to Brown's music department, and is now called the Orwig Music Center 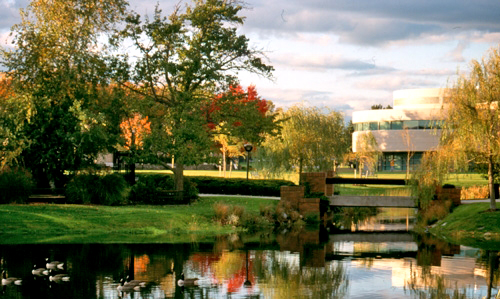 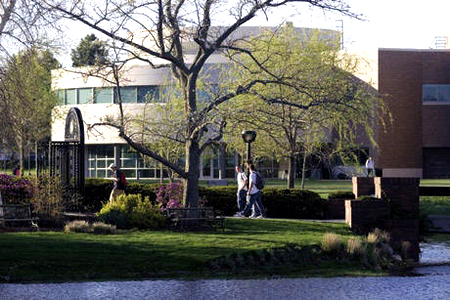 Smithfield - In October 1967, Earl S. Tupper, alumnus and inventor of Tupperware, donated his 428-acre (1.73 km2) hillside estate to Bryant College for the creation of the new campus. To thank Tupper for his generous gift, Bryant named the campus after him and awarded him a second degree, an honorary Ph.D. in Humane Letters. In 1971, the University moved to the new campus. The famous Bryant Archway was also relocated. The old Emin Homestead and Captain Joseph Mowry homestead occupied much of the land that makes up the present day Smithfield campus. The land was purchased and farmed for three generations between the late 19th century and the mid-20th century. Today, many descendants of the original Emin settlers still live near the Bryant campus. The school also claims a handful of family members as alumni and offers a scholarship for accounting students as a tribute to the Emin family. Historical pictures of the Emin Homestead can still be found in the Alumni house. 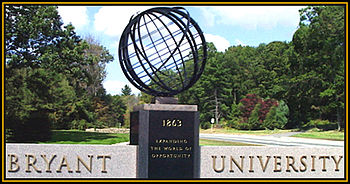 Bryant Archway tradition - Students at Bryant have a particular way of symbolizing the completion of their education: walking through the archway. The story of the archway dates back to 1875. Isaac Gifford Ladd, an associate of Charles M. Schwab and a famous U.S. steel tycoon, constructed a one million dollar building which contained the iron arch on Young Orchard Avenue on the east side of Providence. This building was meant to be a sign of his endearment to his newlywed wife 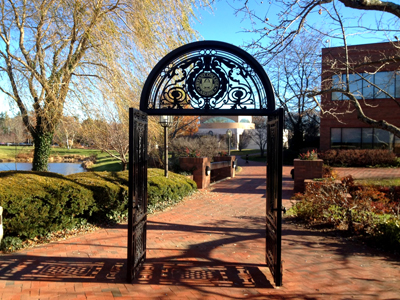 However, his wife expressed hatred for the structure which was named after her. He took this as a personal rejection, and Ladd later took his own life. The building remained unoccupied until Thomas Marsden transformed it into Hope Hospital, which was part of Bryant College. To provide more space for classes, an addition was constructed and Hope Hospital was renamed South Hall. Four years later, prior to the school's move from Providence to Smithfield, the wrought-iron arch at the entrance to South Hall was transported to the new campus.

Today, the archway remains the only physical link to the Providence campus. After the archway was transferred from the old campus, students immediately began to avoid passing through this out-of-place structure. As a rumor had it, walking through the archway before graduation mysteriously jeopardized chances of graduating. Since this is quite a large price to pay for not following tradition, most students opted not to take the chance, which has resulted in worn paths around the arch. This tradition has shaped the behavior of thousands of Bryant University students on Tupper campus for the past 30 years, and has become a focal point in the legend and mystique of Bryant