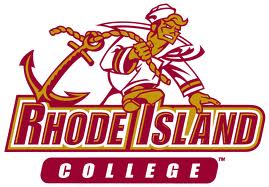 Rhode Island College was first established as the Rhode Island State Normal School by the Rhode Island General Assembly in 1854. Its creation can be attributed to the labors of Henry Barnard, the first state agent for education in Rhode Island who had established the Rhode Island Teachers Institute at Smithville Seminary in 1845, and his successor, Elisha Potter. Rhode Island State Normal School was one of the nation's first normal schools (teacher preparatory schools), which grew out of the humanitarian groundswell of the mid-19th century spurred by educational missionaries like Horace Mann. The school attracted hard working young people who came chiefly from ordinary backgrounds, who wanted to teach and who had no other way of preparing themselves.

Not yet thoroughly convinced of the school's value, the General Assembly curtailed its financial support in 1857 and the school was moved to Bristol where it lingered until 1865 before closing. However, in 1869, the newly appointed state commissioner of education, Thomas W. Bicknell, began a vigorous personal campaign to revive the school. His efforts were rewarded in 1871 when the General Assembly unanimously voted a $10,000 appropriation for the school's re-opening in Providence.

Renamed the Rhode Island Normal School, the institution settled into a period of steady growth punctuated by periodic moves to larger quarters. The general favor won by the school after its first difficult years had passed and was confirmed in 1898 when it moved into a large building specially constructed for it on Providence's Capitol Hill near the State House (this space is now occupied by the Providence Place mall.

In 1920, the Rhode Island Normal School was renamed Rhode Island College of Education by order of the General Assembly, the college now offering a four-year program which upon completion one would receive a Bachelor of Education degree. At this time the observation school, which dated back to the 1890s, was renamed the Henry Barnard School. The college's graduate program also originated in the early 1920s and the first master's degrees were conferred in 1924.

For the next three decades the college remained a small, teachers' college with a student body of four to six hundred men and women, most of whom went on to teach in the elementary and junior high schools of the state. Early in the 1950s that calm was shattered by intense debate that arose over the college's role in the state system of higher education and for a time serious doubt was cast on its continued existence. There were plans to merge the institution with Rhode Island's other four-year college, the University of Rhode Island. After careful consideration, the Board of Trustees of State Colleges decided to keep the college independent and strengthen it overall.

In 1958, the college was moved to its current campus in the Mount Pleasant section of Providence. In 1959, the Rhode Island Commission to Study Higher Education recommended the development of the institution into a general college which was approved by the General Assembly. Reflecting the broadening of purpose, the institution's name was changed to its current name Rhode Island College in 1959.