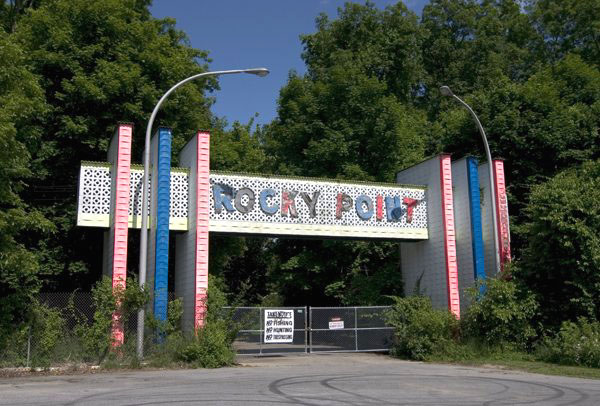 The Rocky Point Amusement Park was a highly popular landmark on the Narragansett Bay side of Warwick, Rhode Island. It operated from the late 1847 until its close in 1995. The following year, the park filed for bankruptcy.

Rocky Point was an idea first thought of by Captain William Winslow in the 1840s. By 1847, he had purchased a portion of the land and began to offer amusements and serve dinner.

1847---Capt. Winslow becomes owner of Rocky Point and he and “Mother” Winslow serve shore dinners on long tables under the trees.

1850-1858—Winslow adds a carousel, swings, and the Spanish Fandango, the forerunner of the Ferris Wheel.

1860—Stephen A. Douglas, the “Little Giant,” addresses a large crowd at Rocky Point in his campaign to win the presidency.  Despite the good reception at Rocky Point, Douglas loses to Abraham Lincoln.

1860’s The Forrest Casino features minstrel shows, including one with an all-female cast.

1883—John L. Sullivan, the “Boston Strong Boy” and heavyweight-boxing champion, fights an exhibition with Steve Taylor, drawing a crowd of 2000.

1907—Joseph Carruolo moves his carousel from lakeside Park in New York to Rocky Point.  Becomes known as the “Merry-Go Round King.

1918—After Col. Harrington dies, his widow closes the park for lack of patronage.  Park re-opens 1920.

1942-45—Park closed because of World War II shortages and rationing.

From the 1950s through the 1980s, Rocky Point Amusement Park was the most popular attraction in Rhode Island. It featured rides such as the Skyliner, Corkscrew Loop Roller Coaster, Log Flume, and the Freefall (similar to the identically named ride at Six Flags Magic Mountain), which fell 13 stories at 55 mph (89 km/h).

In the early 1990s, Rocky Point's financial situation became shaky. The privately-held company that owned the park began to lose money as it attempted to keep the park up to date. Critics accused the company's shareholders of trying to wring every last penny out of the park. Rocky Point closed in 1995, then reopened briefly in 1996 as a farewell to patrons. Rides such as the Flume and Corkscrew were sold in an auction and are now in use at other amusement parks.

The official public records of the Federal Bankruptcy Court in Worcester, MA will confirm:

These facts were confirmed again in the Providence Journal and The Warwick Beacon during the Bankruptcy periods of 1995-1997.

If all these loans were not abused, Rocky Point Park just might have still been in business today.

After the Rocky Point land was purchased for $8.5 million in 2003, the park's main building, known as the "Big House", was hit by vandals who lit it on fire on September 2, 2004. Police said the fire was suspicious, because the building had no electricity at the time.

Another fire started on October 16, 2006 around 11 a.m., this time in an executive building on the waterfront. Smoke could be seen billowing up more than 2,000 feet (610 m) in the air from miles away. Police reported no injuries in either fire. It is unclear if this fire was caused by arson.

On May 7, 2007, demolition of the remaining midway officially began with a press conference at the park. Prior to this, a handful of stands and minor buildings had already been demolished.

On September 7, 2007, a documentary film about the park titled You Must Be This Tall: The Story of Rocky Point Park had its world premiere at the Stadium Theatre in Woonsocket, Rhode Island. The film, which is available on DVD, garnered a five-star review from The Providence Journal and played to a sold out crowd of 1,100 people.

In January 2010, a newly-formed non-profit entity called The Rocky Point Foundation, Inc. announced its efforts to press for a public purchase of the remaining 83 acres held by the receiver for the property. If successful, this effort would return public access to the Rocky Point property and continue a 150-plus year history of Rhode Islanders of all ages, backgrounds, and incomes enjoying this seaside retreat. The Rocky Point Foundation has been active in signing up the many people who support a public Rocky Point through its "getthepoint.org" website, public events, and a "Get The Point" bumper sticker campaign.